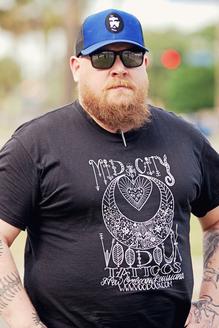 Scott is, for all intents and purposes, not a real person. He is more machine than man, a droid of sorts, imported for the government, digitally combined with a giant gorilla only found in the deepest jungles. Scott was deployed as a bringer of destruction, and it was his life’s purpose to destroy every moving thing with laser beams shooting from his eyes and his hairy steel clawed hands wrapped around the throat of whatever crossed his path. Eventually bored of the constant destruction, he decided to travel to New Orleans and do what came naturally, tattooing. His hideous appearance was shunned, but he was eventually taken in by Juju and joined the Mid City Voodoux krewe. He chooses his victims, narrowly pointing them out with the bright dot of the laser, and demands they be seated in his chair. Those who survive, leave with a permanent mark not only from the tattoo, but his once deadly grasp.