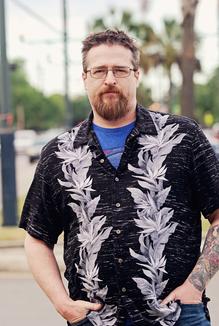 Not much is known about the origins of the one they call Richard, though it is whispered in hushed tones that he emerged from the depths of an ancient land known now as the Midwest. Once confronted about his beginnings by a drunken hobo, he sliced the man in half with a large sword. It is as yet unclear where he produced this sword from. Eventually, he was taken in by a woman and cared for the best way she knew how, which meant a lot of weapons training and bare-knuckle boxing. It was then that he picked up a love for the art of tattooing. Together they stormed the city of New Orleans, where he found the tattooing field to be a lucrative business. Most famous, however, is his method of not so much using a needle and ink, but instead staring down a person’s skin until colors and designs raise up purely out of fear.