Lirette began tattooing in 2008 and now works for Mid City Voodoux Tattoos as one of their motley little family, but most of her past life has been black barred by the United States government in an effort to keep us all “safe” from the truth. Her past is almost too terrifying to believe, strictly on a need-to-know basis, and frankly, is worth killing over. Most of Lirette’s off-time was spent trying to uncover the mysteries of ancient civilizations, that much is common knowledge. Her journey through shark infested waters in an attempt to unravel the secrets of the lost city of Atlantis is spoken of in awed tones by even the most seasoned explorers. Second only to her ability to ink wonderful and accurate objects into people’s skin, are her skills in the deadly art of Krav Maga. She can steadily tattoo a man’s throat and snap his neck at the same time, without screwing up either operation. This is probably what earned her the call sign “She Beast” among military operatives. 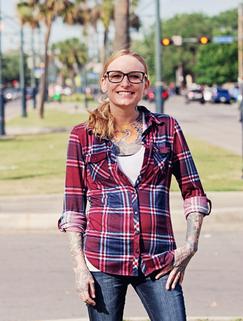