Strictly speaking, Juju is no longer human. His parentage is a mystery, but legend has it he was raised in the dank swamps of Louisiana by a vicious creature only half-human himself. Growing up on a diet of venomous snakes, raccoon tails and alligator scales will do things to a man, especially when your “father” has the head of a wildcat and the body of some strange murky swamp god. Luckily for Juju, local voodooists took pity on him and his master, allowing him the opportunity to learn to speak in sounds other than grunts and roars. He rose to great popularity among the tribe, making of himself a mighty voodoo priest, resplendent in his magical snake-charming abilities. With this title came rights to the princess of the clan, who cast her spell on Juju and locked him into a blood-bond some years ago. For all the things the voodoo clan taught Juju, he in turn brought with him the artful skill of forging brightly colored tattoos beneath the skins of his fellow tribesmen, his work becoming a rite of passage toward manhood for generations to come. Juju and his voodoo queen eventually took their practice on the road, and found a place at Mid City Voodoux Tattoos, where Juju conjures up the Loa to live in the skins of his friends and bring them luck. His bride works at his side, making curse bags from the bones of Juju’s heathen sacrifices. Those are every Tuesday, and it’s a ton of fun, as long as you aren’t the vestal virgin. 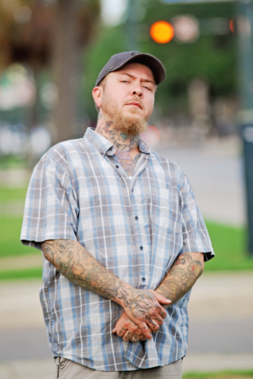 MONDAY-SATURDAY BY APPOINTMENT ONLY