A human embed by the power of the Norse gods and gifted with the body of the like. Birthed from the lust of Thor and a valkyrie, he was instilled with purpose well beyond the measures of mortal men. One such incredible responsibility could only be above the walking living to exact his destiny. He came to power by rite of mortal combat, slaying the bastard king of a nearby Viking village and named himself king. To affirm his mighty grip, he dawned the fleshy cowl of the king's rotting head upon a spike - thus gaining his foreboding title Chad the Impaler. His conquest laid siege to the decimation of entire nearby village, bringing forth unholy pillaging and savagery in blood. In his collection of crimson innocence, he bathed canvases in it's red essence. It was said that these cursed paintings became alive and haunted Chad into a rapid exile forcing him into the woods. His belongings of great treasures, a multitude of wives and children, and his throne were left behind to escape a gruesome fate. During his absence, it is said he cultivated himself to that of a modern man. Roughly 1,000 years later and a likeness of a being emerged inked in flesh and bearing resemblance to the great Chad the Impaler. Many say he is no mere mirror or fluke of an existence, but the horrifying tale of this savage blood king; immersed in modern times and blending in, still escaping his demons from old. But you wouldn't know by meeting him, as his charm and sunny dispositions are no dead giveaway to such rumor and gossip. 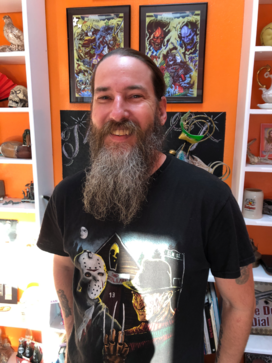